Redifuel – Determination of a fuel matrix

To enable the initial screening of the “Redifuel” at early project stages, surrogate fuels must be selected due to the limited availability of the final product at the beginning of the project. A large portion of the fuel will be made up by alcohols produced in the hydroformylation (HF) process. During the HF process not only linear but also branched alcohols are produced. Those are either not commercially available or very expensive. Max-Planck-Institute (MPI) provided a small sample of the target alcohol mixture (TAM) for analytics at OWI and Tec4Fuels. The TAM contains both linear chain and branched alcohols. As a surrogate replacement for TAM, a mixture of individual linear chain alcohols (surrogate alcohol mixture, SAM) has been selected and its suitability to represent the TAM had to be proven. With the available portion of the TAM, most of the important properties such as density, viscosity and cetane number were compared with the surrogate mixture. In this process, the compliance of TAM (blended with GtL and Diesel) to the current technology and EN?590 standard for diesel fuel has also been checked by OWI, Tec4Fuels and RWTH Aachen University.

Procedure and results of the investigations

First, the chemical-physical properties of SAM and TAM were investigated by OWI and Tec4Fuels. Subsequently, the blend ratios of the alcohol mixture and the paraffinic fuel with standard diesel fuel to fulfill EN?590 requirements concerning density and viscosity have been determined. The surrogate and TAM show similar density and viscosities over a range of temperatures from 15?°C to 125?°C (Figure 1 and Figure 2). At 15?°C the TAM and the SAM show densities of 830.69?kg/m3 and 828.13?kg/m3 respectively. The viscosities at 40?°C of the TAM and the SAM are 5.3902?mm2/s and 5.6650?mm2/s respectively. Thus, concerning density and viscosity the SAM is a suitable representative of the TAM for the preliminary testing of „Redifuel“. 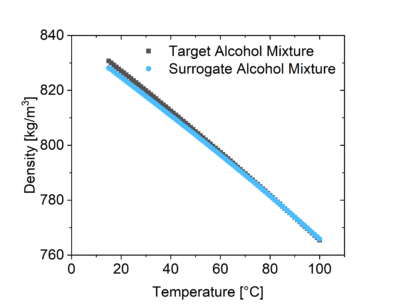 Furthermore, analysis by VKA-RWTH revealed that the SAM and TAM as well as their mixtures with 50% GtL resulted in approximately the same Indicated Cetane Numbers (ICN) (Figure 3). Thus, the SAM is an appropriate substitute for the TAM concerning Cetane Number, too. According to first characterization, blends with an alcohol content up to 40 vol% C6-C11 alcohol mixture in GtL has CN of more than 51, which is above the minimum requirement for EN 590 standard.

What is the surrogate mixture used for?

The measurements contribute to a selection of a suitable fuel matrix to conduct further investigations using the surrogate mixture. The selection of suitable surrogate fuels and the determination of a fuel matrix enable the investigation of fuel properties, the impact of fuel on various materials of a fuel system, effects on lubricity and ageing characteristics as well as performance in the engine already at an early stage of the project.

What is the objective of the research?

The EU research project REDIFUEL aims to develop and produce a high-quality renewable diesel biofuel that is drop-in capable with conventional diesel fuels in any blend ratio. This new “Redifuel” is to be compatible with current and future engine technologies and must meet the chemical-physical properties specified in the EN 590 standard for diesel fuels.